SHEPHERDSTOWN, W.Va. —  On Tuesday evening representatives from Shepherd University, the Potomac Valley Audubon Society, and the State Department of Natural Resources hosted a public forum regarding the demolition of Sara Cree Hall and the relocation of the migratory chimney swifts that roost inside it each fall.

Bridget Tinsley, a Land and Watershed Program Manager with PVAS, explained the importance of the neotropical species that travels 6,000 miles between Canada and South America during its migrations.

They are insectivores, so they make natural pest killers, and they typically roost in standing, upright trees.

Due to deforestation these birds have taken to nesting and roosting in manmade structures like chimneys, which has also resulted in them being very social and urban creatures.

There’s been a 72% decline in their numbers since 1966, so the Audubon Society is looking to do what they can to reverse that process.

Tinsley said luckily there was already about 30 years of research about the swifts ready for them upon their arrival.

“We have members with the Audubon Society here locally, but also individuals in the community that love bird watching have taken it upon themselves to compile data. We have data from 30 years of people who, every year, go in the fall and monitor the number of birds and find their locations. So we’re building on those decades of data.”

Tinsley estimates there’s about 1,400 chimney swifts native to Shepherdstown, as they’ve been monitoring the Sara Cree Hall chimney in preparation of this project as well.

The demolition of Sara Cree Hall is part of Shepherd University’s Master Plan, and has been tentatively scheduled for May 6th of next year.

Eric Shuler, Facilitations Management Director for Shepherd University, said initially that space will be transformed into a gravel parking lot.

“[The chimney at] Sara Cree will be “capped” in January 2017. As a next step habitat for them in their migration period in the spring and summer of next year will be Knutti Hall, which we “uncapped” in November,” he explained. “Long term plan is a parking structure and student center; however, the Master Plan process is revisited every decade or so, so that’s subject to change. It’s also subject to the University’s financial capacity and interest to what to put in that location.”

The chimney swifts have nested and roosted in Knutti Hall in the past, so it’s just a matter of reacquainting them with the structure.

He also said they’ve been in touch with the Department of Natural Resources, the National Conservation Training Center, and the PVAS to field suggestions for the plan.

The next step prior to demolition for the PVAS will be researching with the public on ways to raise money for a faux chimney or similar roosting structure to give the birds a variety of locations.

Tinsley showed some examples of nesting structures (smaller than roosting structures) that start at about $400, but she emphasized that due to the number of swifts they’ll be looking for something large-scale.

The PVAS is also looking at incorporating future habitats on West Campus’s bio-retention pond and other natural areas.

About 50 members of the public were present for the forum, and many of them expressed interest in getting personally involved with the project.

President of the Potomac Valley Audubon Society, Mike Sullivan, said he was pleasantly surprised to see how much emphasis the public put on educating the uninformed.

“I was tremendously pleased to see this many people come out. People are concerned about their environment and they want this to continue to be a great place to live. Education is key, and cooperation with the University is perfect.”

The only major concern brought up by an audience member was finding a way to honor Dr. Sara Cree once her lecture hall is demolished, but he was informed that a committee has been created and is searching for a solution to that very issue.

If you would like to learn more information about the chimney swifts and how you can make a difference, you can visit this website dedicated to local solutions.

To contact the Potomac Valley Audubon Society in order to help them with their fundraising efforts, you can visit their website. 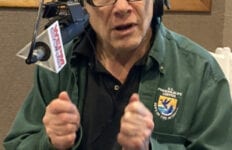 Cicadas Have Arrived, but They Mean You No Harm, According to Local Expert→ 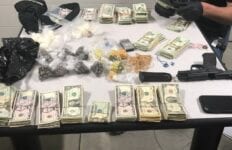