Martinsburg, W.Va– A 5-0 start to the season hasn’t come without dramatics for the Shepherd Rams, who have now found themselves comfortably solidified within the nation’s top 5 division 2 ball clubs.

Listen back to the highlights 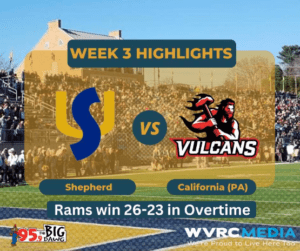 And a late touchdown to defeat rival Kutztown.

The Rams are battle tested and now turn to a more favorable part of their 2022 schedule. So, with a healthy sample size, let’s grade Shepherd’s performances and performers so far.

Tyson Bagent is in the midst of another incredible season. The 2021 Harlan Hill winner leads D2 football in passing yards, is 3rd in touchdowns, and 5th in completion percentage.

Granted, he had to deal with a tough weather game against Shippensburg, and was game scripted out of more pass attempts against Edinboro so that slightly dings his numbers.

While he’s slightly behind his record setting pace from a year ago, Tyson himself would be quick to tell you I left out the most important stat. Shepherd has lost a game though their first 5 last season and haven’t this year.

Running the football was highlighted as a top concern coming into this season, and has certainly surpassed all expectations. But it still has had its hiccups at times this season.

Through 5 games played, the Rams have eclipsed 190 yards on the ground 3 times (they did this twice through 5 last year). However, the 2 games in which they haven’t, they were held to 14 yards rushing against Cal and 11 against Kutztown. Shepherd had only been held under 50 yards rushing twice since 2015 before this season.

Ronnie Brown is putting together his own Harlan campaign, leading the country in yards per carry (9.5), 8th in rushing scores, and 11th in rushing yards. The only other blemish against the backfield is a lack of an established #2 back. Avaughn Holley opened the season as the back up but has been dormant. Blake Hartman showed flashes in garbage time early, but struggled against Shippensburg getting true #2 work.

Brown is great, some may call him the baddest man in Shepherdstown, but he needs spelled at the position, and the Rams need depth in the event of injury later in the year.

Marlon Cook has been a Godsend for this program. #2 in the nation in receiving yards, he has become Bagent’s top target. Ryan Beach has also come back into his own after nearly 1,200 yards receiving last year.

7 different players have caught touchdown passes this year, with 4 of them being receivers. While Cook and Beach highlight the position, what bolsters this group is its ability to comfortably play as many as 7 different players, 6 of which, have eligibility remaining after this season.

Tight Ends and Fullbacks: B-

719 yards and 8 touchdowns went to this position last year, one score, in particular, comes to mind.

@SURamsFootball Here is the radio call heard on 95.9 The Big Dawg! pic.twitter.com/PObHJcfsUT

Brian Walker had just 64 yards receiving through his first 2 games this year but has 244 over his last 3, rising to become the team’s 2nd leading receiver.

Michael McCook has a pair of scores this year, both in the red zone, as he becomes a handy option to look for inside the 20.

It’s hard to critique the boys in the trenches but I truly believe the best is yet to come for this unit. Unfortunately, they’ve allowed 12 sacks through the start of the season after allowing 15 total in 15 games last year.

With that being said, I’d still take the right side of their line in Adam Stilley, Ty Lucas, and pro prospect Joey Fischer over anyone else in the league.

They also have been praised heavily by Ronnie Brown for his success on the ground.

Certainly the anchor of the defense, the defensive line has been defined by its versatility and depth.

The Rams are 10th best in the nation in rushing yards allowed and yards per rush. To this I like to attribute the success to, among others, Shepherd’s Matt Bednarski, Nathan Muhle, Jurnee Dunbar, and Solomon Alexander’s ability to swap in and out almost like a hockey line change at defensive tackle.

Against the pass, Ernie McCook boasts Malik Holloway and Kyle Smith who book-end the line and have 4.5 sacks each.

My bias is showing here, I absolutely love the linebackers on this team. Firstly, they play undersized yet don’t give up an ounce of physicality.

Enelio Pena (180 pounds), Devon Lynch (191), and Dewayne Grantham (205), all are stout against the run but can drop back into coverage basically becoming safties on the field which leads to their second strength, red zone defense.

The Rams have the 3rd best red zone defense in D2 football holding opponents to just 8 scores in 17 trips, and just 5 of those scores being touchdowns.

A Largely rebuilding unit, Shepherd have allowed the 7th most passing yards in the nation through 5 games.

This is not anything necessarily new to the Rams who actually had given up 20 more yards through the air at this point last season, but, the proclivity to give up the big play has kept opponents in games against Shepherd.

Only 2 of the 6 interceptions this season have been from players in the secondary, though, Klayton Batten’s takeaway was a pick 6.

Were this unit to improve, which I believe it will, it sures up Shepherd’s biggest weakness and could make them a team without one.

Not many complaints here. Ryan Barrick is actually averaging fewer yards per punt than Tyson Bagent but I expect that to change. Only 17 teams have punted more than the Rams this year.

Jacob Haynie started 2-3 in field goal tries but has missed his last 3. Albeit horrible weather plays a factor in that.

Shepherd has defended the kick of (ranked 39th) and the punt (36th) relatively well. And in the return game, Ronnie Brown has returned one kick off for a touchdown.

Maybe I was a little too harsh on the #4 team in the land, I just look at it as room for improvement. Shepherd is 140th in the country in penalty yardage which needs to change as well, as I expect it to under a phenomenal coaching staff.

The Rams have playmakers and depth all over the field, I don’t envy opposing head coaches and coordinators who try to game plan for this bunch. Especially as they improve week to week.