MARTINSBURG, W.Va. — More details are emerging about a multi-vehicle accident on Interstate 81 Thursday that claimed the lives of two truckers who were trying to help.

Sheriff Nathan Harmon tells the Panhandle News Network it was one of the worst incidents he’s seen in his career. Emergency Responders were called an area near the Spring Mills exit at about 7:30 a.m. There were four vehicles and two pedestrians involved in the incident, which was the result of two separate crashes.

The first involved two passenger cars that lost control and left the interstate. The first hit a parked tractor trailer and was subsequently struck by an SUV, wedging it under the tractor trailer.

Although those in the wedged car were trapped, they did not sustain life-threatening injuries. However, the sheriff reports several people stopped to render aid including two uninvolved tractor trailer operators who approached the scene on foot.

A Nissan Pathfinder struck the parked tractor trailer, which hit the two truckers who had been in front of it. The men, identified as 53-year-old Adam T. Miller of Hagerstown, and 46-year-old Ashis P. Patel of Ontario, Canada suffered severe injuries and were pronounced dead at the scene.

The driver of the Pathfinder, 47-year-old Jason Hooper of Martinsburg was transported from the scene with life-threatening injuries.

It is believed that weather and speed were significant factors in the incident. There was also a separate two-vehicle crash at the same scene that involved no significant damage or injury. The incident and ensuing investigation resulted in a complete closure of the rest area as well as a closure of two lanes on Interstate 81 southbound for approximately seven hours.

Harmon tells the Panhandle News Network his “thoughts and prayers go out to the families of the pedestrians involved within this accident whom, by their own drive to do the right thing and help those in need, sacrificed their lives to help others. I cannot expect folks to disregard their intuition to want to help those in need, it is ingrained within our God given moral and ethical fibers as human beings, but I need to emphasize that when your in a situation like the interstate whereas you have vehicles traveling upwards of 60, 70, 80 mph and upwards of 80 feet per second, we must remain vigilant and aware of our surroundings so as we can keep ourselves safe at the same time rendering aid.” 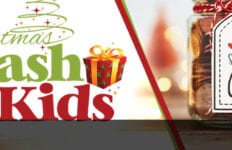 Every Penny counts, click here to donate to Christmas Cash for Kids!→

Herendeen Stepping Down from CATF→