MARTINSBURG, W.Va. — In a second try at a sentencing hearing, a federal judge sentenced a a couple accused of attempting to sell the secrets of America’s nuclear submarine fleet to about 20 years in prison each.

That’s significantly more time than the first attempt at a sentencing hearing in August, when U.S. District Judge Gina Groh concluded a plea deal for the Toebbes was too light for the damage that could have been inflicted.

This time, in a sentencing hearing on Jonathan Toebbe’s 44th birthday, Judge Groh imposed a heavy penalty for the charges.

“The defendants’ actions and greedy self-serving intentions placed military service members at sea and every citizen of this country in a vulnerable position, and it risked the harm from adversaries,” said Groh, a judge in the Northern District of West Virginia.

The Toebbes are former Annapolis, Md., residents who were arrested in Jefferson County in 2021.

They were accused of working together to sell information about America’s most sophisticated nuclear-powered vessels on memory cards, taking them to drop points hidden in mundane disguises like sandwiches or gum wrappers and asking for infusions of cryptocurrency from agents they believed represented a foreign power. Instead, it was an FBI agent.

“If not for the remarkable efforts of FBI agents, the sensitive data stolen by Mr. Toebbe could have ended up in the hands of an adversary of the United States and put the safety of our military and our nation at risk,” U.S. Attorney Bill Ihlenfeld stated in a news release.

Jonathan Toebbe’s lawyer, Nicholas Compton, said his client has tried to atone for his actions.

Jonathan Toebbe was a nuclear engineer for the Department of the Navy, assigned to the Naval Nuclear Propulsion Program. He had an active top secret/sensitive compartmented information security clearance through the federal government.

Diana Toebbe is accused of being his lookout for a series of dead drops of information, including in Jefferson County, the location that prompted the federal court jurisdiction in West Virginia.

Her lawyers and federal prosecutors had asked for only about three years of prison time, but Judge Groh took other factors into account, including two letters to Jonathan Toebbe that were intercepted by the jail system.

In the letters, Diana Toebbe claimed her own innocence, contended she had believed the plot was only about cryptocurrency and asked her husband to admit full guilt so that she could continue raising their children. By today, all sides and the judge concluded those letters represented another plot hatched by the couple to limit Diana Toebbe’s criminal exposure. The judge characterized it as an attempt at obstruction.

“While Mr. Toebbe had access to the information, she was a big part of the plan — not only in carrying out the plan but also in the coverup story,” Groh said.

Diana Toebbe told the judge she had made catastrophic decisions. But she described herself as depressed at the time the plot unfolded and she believed the political situation in the United States was dire. The plot was meant to help the Toebbes gather enough money to leave the country.

“I actually participated in helping him but I wanted him to succeed,” she said. “At the time, I absurdly thought it was a way out of these struggles. But this is inexcusable no matter what my family or my country or I were going through.

“I didn’t think through what the impact of my actions might have been on our service men and women. I was enticed by financial gain and the freedom that might come with it.”

Jonathan Toebbe similarly described depression, a period of high work stress and a battle with alcohol that led to the decision to try to sell classified secrets.

“I recognize now that I was in the midst of a nervous breakdown over a period of perhaps 18 months, and I failed to recognize the warning signs,” Toebbe said.

Through tears he told the judge, “I failed my responsibility to the American people to preserve the secrets that were trusted of me.” 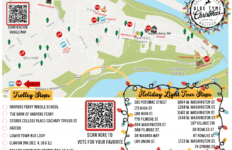